Pretending to Be Normal by Liane Holliday Willey - Book Review 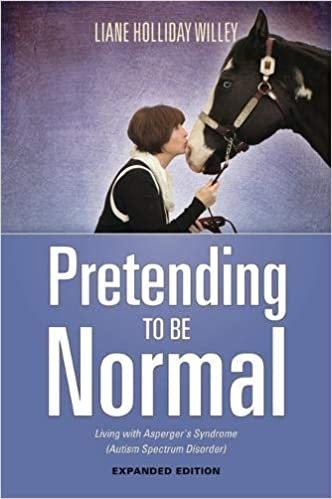 Pretending to Be Normal by Liane Holliday

Willey is an interesting look at the life of someone who recognizes she is different from her peers but hasn’t yet even heard of Asperger’s Syndrome. Like life, the story Willey tells is often humorous, often sad, and, if it can be said of a story, spunky.    In the forward, Dr. Tony Attwood says Willey, “…eloquently describes herself as one of those ‘people who never quite find their way, but never quite lose it either.’

Written after her own child’s Asperger’s diagnosis, it is a book about learning to blend in but on one’s own terms. Also to stand out in a way- stand out as someone who appears like everyone else and as one of the group, even when she feels she clearly does not fit in. Willey makes it part of her life to learn how to be like those around her the only way she knows how – by using mimicry and observation.  She finds that by employing these new tools she can pick up social cues. For example, when in a conversation, if one participant stands up, he or she is signaling that they are finished with their part of the discussion.

In this book, Liane Holliday Wiley takes the reader through her childhood and adolescents giving them- and herself- a look at what she learned in later life were not just personality traits of an independent child but markers of what was to come- the life of an adult with Asperger’s.

Willey brings light to many situations in her early life that she can now point to as Asperger’s behaviors. She says, for instance, that she never quite understood group dynamics which can be an important part of the process of learning how to be in the world. She demonstrates this with examples of her very literal thinking such as not knowing when the teacher said for the kids in her class to lie on their mats and pointed towards blankets, she was referring to them as mats and that Willey could take a nap even though she did not have an actual blanket.

Willey points out how her way of deviating from the norm unnerved adults. It wasn't just her very literal understanding of things but even her rigidity over her choice of books.  She enjoyed biographies, but the librarians at the school actually required that she check out fiction instead.

Willey goes into elaborate in detail and brings the reader into the world of a child who liked things to be just so. With such attention to detail, she is not only telling her story but also instructing readers what signs of Asperger’s in their own children might look like. She describes how she hated scratchy things, tight fitting clothing, and satiny material. She really captures  how it is to only find comfort if things are just right.

In simply telling her stories she demonstrates how important relationships are in the lives of Aspies- how they can amplify confusion or enforce the idea that the Aspie is all right the way he or she is. She describes the importance of finding friends that would more or less coach her and tell her when her behaviors did not fit the situation.

Pretending To Be Normal takes the reader on an objective journey through the childhood, adolescence, adulthood and parenthood of someone living with Asperger’s Syndrome, all the way highlighting the situations that made her realize she was different- that she felt things and responded to things differently- and her journey to reconcile and live with that difference.