Switched On: A Book Review by Sheila Gazlay 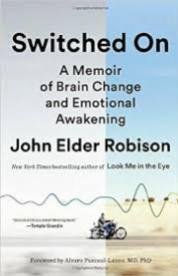 Switched On: A Memoir of Brain Change and Emotional Awakening

A Book Review by Sheila Gazlay

“We build too many walls and not enough bridges.” – Sir Isaac Newton

On first glance at the cover, Switched on: A Memoir of Brain Change and Emotional Awakening looks like it might be a fun read about a guy who rides motorbikes. When you actually read it, though, it turns out to be much more. Really, it’s about success—whether defined by money or personal passions—a theme which runs alongside others like love, family, science, and social interaction.

Switched On is really two stories in one. The main narrative tells of a scientific study on Transcranial Magnetic Stimulation, an experimental therapy for individuals with Asperger’s Syndrome and other atypical neurologies. In parallel, the book follows the outcomes for the people who participated in the study—especially the effects on the author, John Elder Robison.

With this book, Robison explores how being part of the study changed his strengths, abilities, and perceptions. He takes the reader on his own journey of self-discovery, detailing how the therapy changed the way he perceives himself, his life, and those in it.

Led by neurologist Alvararo Pascuale-Leone, researchers tested the therapy (more easily referred to as TMS) on Robison and others at Beth Israel Deaconess Medical Center in Boston in 2008. TMS stimulates the brain through changing magnetic fields; the researchers would try this on certain areas of the brain, and measure participants’ reactions to it. Researchers weren’t sure what specific reactions might occur but were hoping to see if their subjects had any changes in their ability to communicate or better understand social cues. Though all participants had objectively positive reactions, none had the residual effects Robison did.

The bulk of the story is about how TMS awakens Robison’s ability to make emotional connections with music, art, and the people in his daily life. Interestingly, his new self-awareness elicits mixed emotions from his family. He begins to understand the emotions others present to him in his daily interactions. As the owner of a high-end automotive restoration shop, he never fully appreciated how emotional people can get about their cars. While acknowledging that he may never fully understand this, the TMS study helped him develop an ability to empathize with the customers in his car shop.

Robison, diagnosed with Asperger’s at age 40, tells the story of how he learned of the study, how his participation in it affected his immediate family, and what he learned along the way. His natural curiosity and ability to understand and work with complex concepts helps the reader to follow along as he muses and learns more about the brain and neurodiversity.

“Neurodiverse” is a relatively new term, but it is a perfect description for people who fall within the Asperger’s continuum. It allows people who are wired differently to describe themselves without the stigma attached to diagnoses like Robison’s. Neurodiversity connotes an understanding that different does not mean limited. In this way, Switched On presents a new understanding of people with atypical neurological function: they can use their brains differently and have full and successful lives, We should celebrate and respect these people, not in spite of their differently wired brains, but because of them.

Robison talks honestly and openly about concepts such as “autistic emotional oblivion.” He describes the reshaping of his memories caused by TMS and how he can better understand his past emotional reactions. He muses on how learning to detect the emotional impact in memories led him to a new understanding of how his reaction to past events might have been colored by his autism.

Switched On covers the study itself and the six and a half years after its completion. It’s interesting to read how Robison feels he has changed and is perceived by people after the study. The changes—both in how he views the world and how the world views him—have afforded opportunities for personal growth, which we can see in his photography and art. He also comes to see how acceptance of the differences between neurotypical and neurodivergent minds is the first step to a real dialogue about them.

In the postscript of the book, Robison remarks about his high end auto shop, “How did I ever leap from being a car mechanic in New England to doing those jobs on an international stage?” How ever he did it, he did it because of his divergence. His atypical brain allowed him to see the kinds of atypical opportunities hidden from most people’s view.

While Robison sees, and outlines in the book, the benefits of this kind of the TMS research, he speculates that the ability to scientifically “fix” (my word, not his) a the divergent brain might lead to a neuro-homogenization. He ponders if it is really necessary that we all have the same strengths and abilities. And then he balances this with the question of whether it’s necessary we do not.

Robison is a gifted storyteller, no doubt about that. He blends into his telling of the study more personal stories. With great honesty he tells of his mother’s mental illness, his marriages and their failures, and life trying to be a role model to a son with Asperger’s. In Switched On, John Elder Robison makes fascinating connections and weaves them back into the story as he learns how to appreciate his life, the people in it, and—ultimately—himself. Its an insightful, fun read and storytelling at its absolute best.