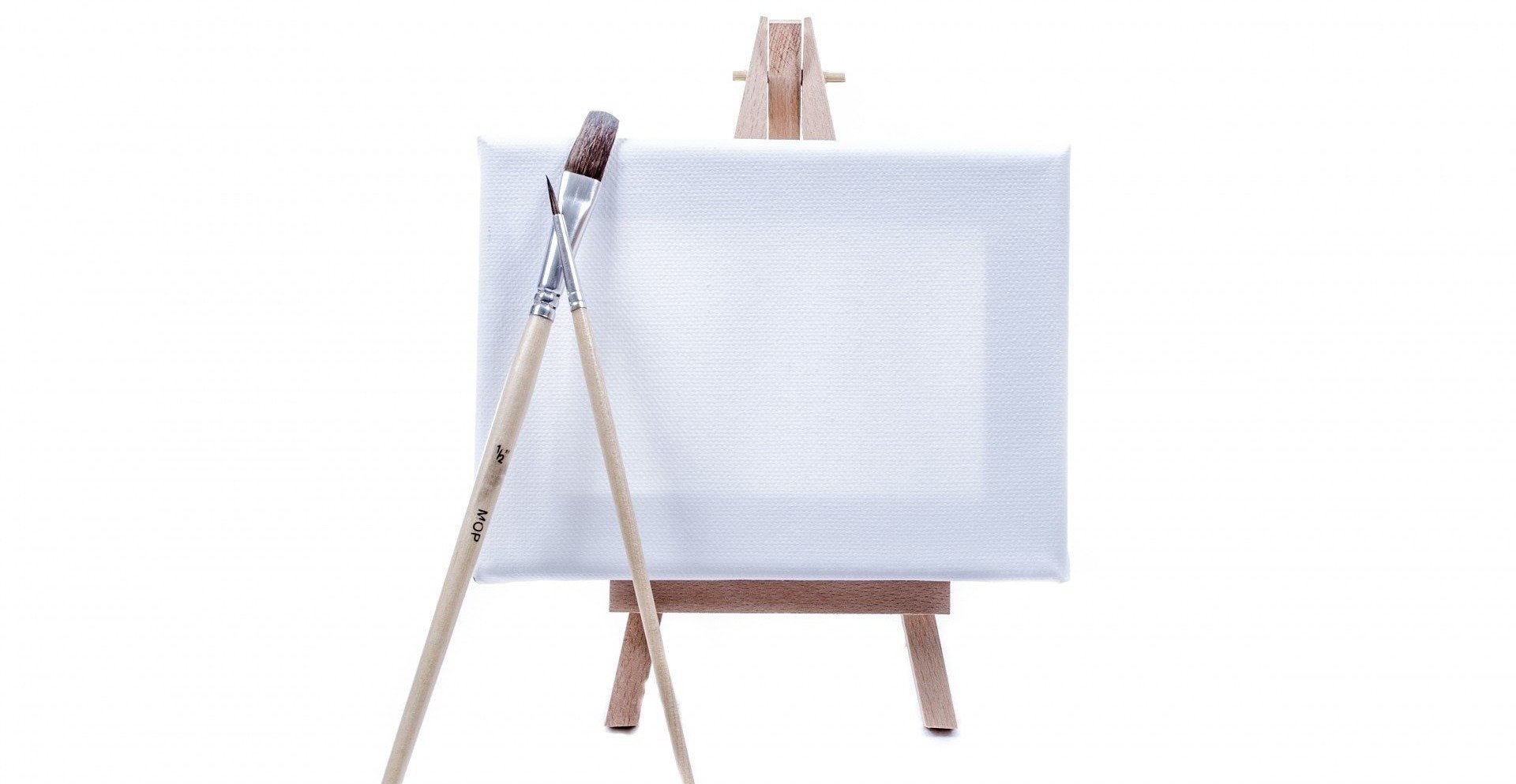 The blank canvas loomed large on its easel, slightly off-white thick fibrous strands standing out even from a distance, a mesh of shadow draped across the surface from the East-facing window. The sun was rising on another un-started masterpiece, its critical eye cresting the horizon as it began its daily cycle of observation and oppression, heat exuded heavily by its dispersing rays.
The painter sat on his stool directly in front of the canvas.

He watched the wisps of gray-scale echoes play across the fabric as the sun rose higher and higher outside. Paint was smeared under both eyes from his already-occupied hands rubbing too-tired sockets. The paint was dried, as were the daubs covering the palette, as were the test swatches and home-mixed pigments scattered on the nearby table.

The rising sun began sending its summer rays down to bake the corrugated tin roof. The small window fan on the West side was spinning lazily about its axis, moving air more as a reminder of how hot it was as opposed to offering any relief. At first the blank white walls served to mitigate the heat, dispersing it across the surface before it could collect into an oppressive body. But as the sun kept rising, so too did the temperature, and the walls couldn’t keep up. Sweat beaded at the painter’s brow, breaking free of the pores to trace their way down the painter’s face, catching the outside edge of the eye and turning in to moisten the dried paint before being absently wiped away. And still the painter sat watching his canvas.

The sun built up speed and outpaced the window, leaving the light temporarily constant and steady across the room, except for occasional cloud-shading. The mesh of shadows stopped morphing the canvas, and the painter likewise stopped watching. Instead he went to the closet and exchanged his sitting-stool for a ladder. He carried this to the East wall and unfolded it next to his once-dappled window, leaving it there. He scraped the residue from his palette with an old putty knife, chipped on one corner and then inherited by way of his father many years ago. Then he applied fresh daubs onto the oaken palette in his palm. The canvas stood still and resolute in the center of the room and waited.

The sun set as slowly as it had risen and still the painter was in the garage. The weak fan was now producing cool air, damp and sweet from the summer night outside as it blew through the space, brushing against the blank canvas. There was a new, more faint, mesh of shadow over the canvas, moonlight-silver instead of dawn-gold. The painter didn’t give it a moment’s notice. In such a frenzy was he that the sweat had quickened, tracing new patterns along the slightly-sunken sun-tanned cheeks, some full of pigment as the once-dried paint leaked down the painter’s face. This time the sweat was not absently brushed away, but instead seeped into the collar of a faded t-shirt, a memento from the rock concert where the painter sold Sno-cones to heat-stricken fans.

Eventually the painter left the garage late into the night, the clouds obscuring the stars, and the moonless night offering no reprieve from the blackness of the world. The door was pulled and locked against thieves, as was the East window, but not the West. The lazy fan spun inside it now, a quiet droning to draw in would-be burglars.
And draw a burglar it did. A quick glance through the glass of the door revealed the entire inside. In the center, the blank canvas on its easel. The lazy fan tipped forward into the room but was caught before it tumbled free of the sill. The burglar slipped inside through the opening afforded by the fan’s absence. Picking up the canvas, touching the rough weave of its artifice, the burglar investigated the painting, or the lack thereof. It was discarded.

The burglar surveyed the inside walls from his new perspective within the room. He saw portraits, he saw landscapes, he saw many disjointed images scattered across the walls, with yawning voids of whiteness between them. The mural pieces seemed haphazard, as if the painter was distracted, yet nonetheless they were artfully rendered. Taking a last look around for valuables, the burglar slipped back out the window. The fan tipped back into position.     The painter returned before dawn, the smears of paint gone, and in their absence dark bags were under the painter’s eyes. These eyes didn’t see the discarded canvas, did not register the skeletal easel standing like a hanging-tree in the center of the floor. Instead the painter refreshed his palette and re-ascended his ladder. The sun rose but there was nothing to cast into shadow. No one noticed.

Three times the sun rose and fell before the ladder went into the closet and the stool returned from its depths. The canvas was replaced on the easel, although it never occurred to the painter to question how it had moved in the first place. Perhaps he had moved it himself. Fresh paint was slowly and absentmindedly smeared on the painter, but he remained watching the canvas.

Eventually the painter approached the canvas, brush in one hand, plunging towards the palette held in the other. The rabbit-bristles hovered over the blue, then the green, then dipped slightly to graze the purple before finally being laid to rest on the table.

The painter left the garage in shame, the blank canvas sitting on its frame mocking him silently, the shadows once again dancing. The heat began to rise, warping the roof so that low dull echoes reverberated throughout the empty space. The weak fan continued its drone, but no one was there to notice. The no-longer-white walls did not reprise their role of mitigating the heat, but no one was there to chastise them. The blank canvas stood as a monument to the painter’s failure, while the now landscape-muraled and shadow-draped walls surrounded it, an unregistered accomplishment, art produced by the artless.

Instead, the warm summer rays shined in like a beacon, illuminating that which was hidden. Wherever the sun landed it highlighted a different aspect of a mural. Here was an abstract portrait of the painter’s first dog, a mottled blue-heeler that never stayed still. Another expanse was covered in a field of daisies, but the colors were muted and blood dripped from the petals in a sinister manner. His first girlfriend had enjoyed daisies.

Across the room was an image of the Sonoran Desert, painted in striking realism so that the cacti looked as though brushing up against them would leave oneself full of needles. That was the window view in the painter’s younger days, before he moved south to the Yucatan Peninsula. Behind the Sonoran landscape was a large and imposing mariachi band, but their instruments were textured like wood and one member appeared to be plucking splinters from his hands. And across all of these images, overlaid by some unconscious design, was a stationary mesh of shadows, painted in faint ghostly lines.

These shadow lines were done in tribute to the incessant shadow-strands of the canvas, the impossibly blank canvas, and its obsession within the painter’s mind. Here was the product of his efforts, arrayed all before him, yet upon a surface he did not wish. All of these images glared into the room, focusing their weight on the blank canvas on the hanging-tree easel, evidence of life lived and truth expressed up against the newly-seeded emptiness thriving within the painter.