Hidden – A Tale of Late Discovery and My Identity 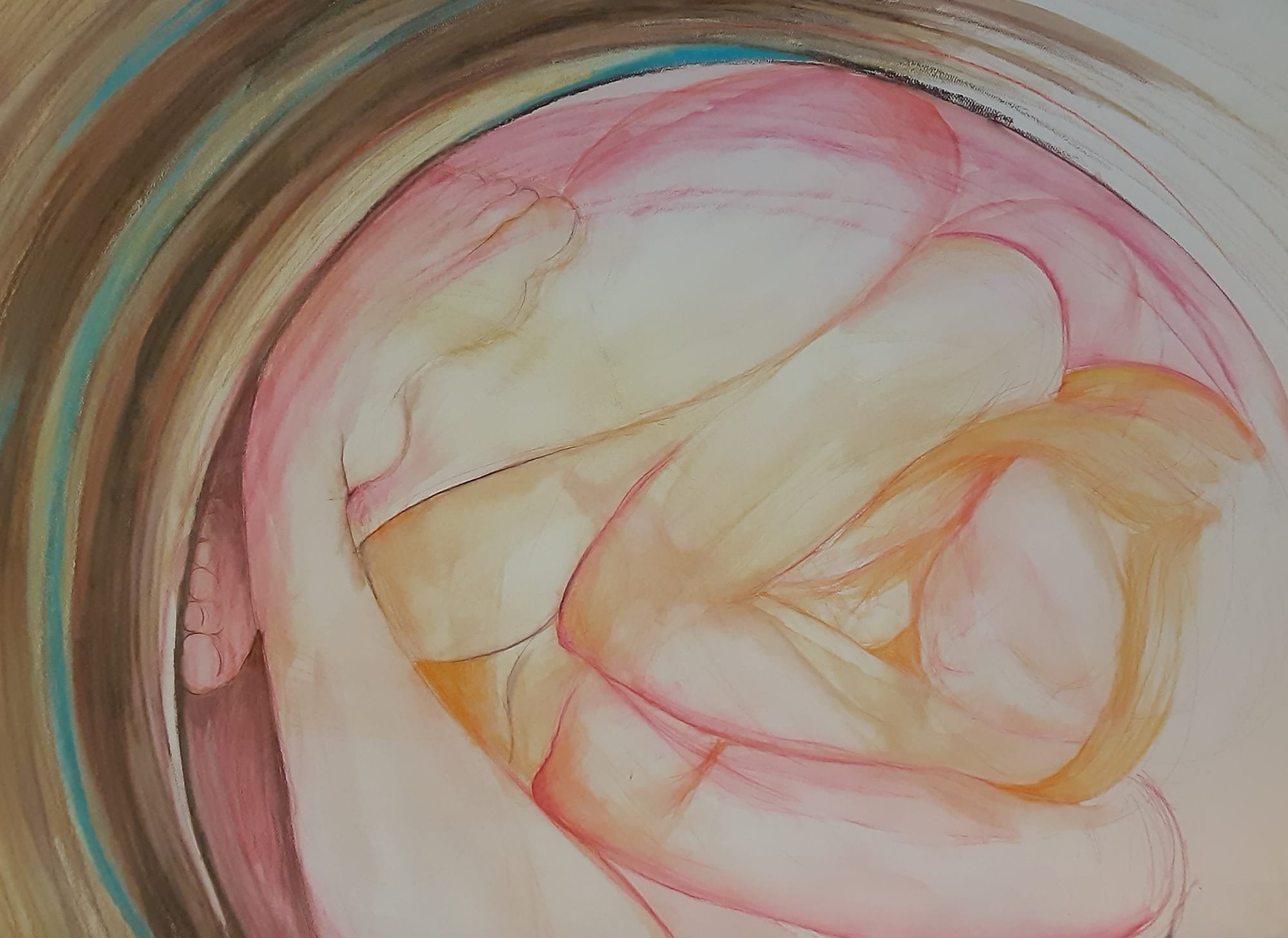 Some Autistic people have a "talent" for pushing themselves past where they should push themselves. I am one of those Autistic People.

My name is Christa, and I am a 34-year-old, multiply neurodivergent adult. I'm also a recovering workaholic.
Like many addictions, my overworking was an escape from a painful reality. I would bury myself in work as a distraction to uncomfortable feelings – my undiagnosed and untreated mental health issues.

Anxiety was a dark, nameless monster for many years. It would whisper in my ear, telling me lies, always reminding me of everything that could go wrong with any given situation—sometimes sending sharp alarms and waves of irrational panic through my body without warning.

It was my well-hidden secret for almost thirty years, as the monster lay in waiting, hoping to be let out to play.
By the time I was diagnosed Autistic, at the age of twenty-nine, I had lived with untreated anxiety for most of my life. Mental health stigma and my lack of understanding around anxiety ensured I would learn to compensate, hiding many of my struggles.

It was all an elaborate mask, designed to help me succeed in a world that can be unkind to people who are different. I was doing my best to navigate a system stacked against me, stuck on the stage in a never-ending play, acting out a role full time – living on autopilot, miserable and unwell.

I learned to mask at an early age. I come from a creative family. My grandparents were part of the local theatre group in our small town when I was growing up. When I was little, my mom would help backstage, styling hair and wigs at lightning speed during set changes.

We saw many shows at the small local theatre. Sometimes, on special occasions, we would drive to Austin, the nearest big city, to see larger productions.

The actors fascinated me. It was magical when they got into character because, as I had learned growing up backstage, in real life, the actors were often nothing like the characters they played on stage.

They played a role, working from a script – as I would later learn to do in my day to day life. I learned a lot watching those actors and then in my roles on stage.

Drama and choir, and music, would become significant outlets for me throughout adolescence. At the time, I didn't realize that I was learning survival skills that would help and hurt me later in life.

Growing up undiscovered and undiagnosed, my sense of self-worth was at an all-time low when I found out I was Autistic. For many years, people had told me that I wasn't good enough, so I learned to hide - be who people wanted me to be and live the life I was expected to live.

The people around me didn't seem to struggle in the same ways that I did and were continually pushing me to do better, accusing me of being lazy or not trying hard enough. Even when I put in extra effort, I often fell short of what was expected of me.
That can do a number on your mental health, work hard, and do your best, only to be told repeatedly that your best isn't good enough – that you need to work harder.

I had slowly lost myself because I'd been tricked into believing that who I was wasn't good enough. I put myself on the backburner and changed who I was, trying to be something I wasn't. My wants, desires, and needs seemed trivial to me because they had been dismissed multiple times throughout my life.

The outer critics planted seeds for a strong inner critic. I started to believe, as many people over the years had told me, that my best wasn't good enough, so I pushed and pushed, even when things were more challenging for me than they were for other people.

Eventually, I got to a place where I could regularly push myself past my breaking point, to the point where my health would spiral downward. It was an unhealthy cycle of running myself into the ground and getting so sick my body would crash, forcing me to rest and recover.

It is an unknown sickness that often appears in times of change or stress. I've battled off and on throughout my life. I've had doctors call it many things – IBS, anxiety, a way to skip class. The Autistic community would call it burnout.

Burnouts tend to be caused by stressors in the Autistic person's environment. The stressors can be mental or physical. My burnouts come when I am taking on or doing "too much," putting myself into stressful situations too frequently. Some things can burn me out quickly, and some things will burn me out more slowly, like masking – the silent killer.

I'm a chameleon, an expert masker. I can be fun and playful or serious and attentive. I can sit still, with proper posture, and give the impression of eye contact. There are many masks, many characters that all require varying skill levels to pull off. Some costumes are more elaborate than others.

This costume is the heaviest of all because it is elaborate and is built up of many pieces. This role requires the most energy and effort to pull off because the character must follow many rules. It's not a mask I can wear every day. It's too heavy.

Masking can be hard on your self-esteem. When things you do naturally seem to irritate or be strange to other people, you learn to become whoever the person in front of you expects you to be.
When an autistic person masks their Autistic traits, it's not intended to be deceptive. It is a way for that person to blend in, survive, or avoid abuse and bullying.

Shaming comments like "That was weird!" "What's wrong with you?" and "Are you okay?" become cues not to do whatever it was you were doing just before the comment was made. So you learn to put little pieces of yourself away – not now, not here, not in public.

The brain is a power-hungry organ, and masking is a lot of work. At any given time, an Autistic person who is masking may focus all their energy on many things to blend in so as not draw unwanted attention to oneself.

They try to figure out facial expressions, work to try and read body language, try to figure out when to talk, filter out background noise while following a conversation that is moving too quickly for them. They may wonder if they are stimming too much. They may have to focus on not making noise or talking themselves through things out loud.

All of this work can burn up lots of mental energy. Masking from time to time probably won't hurt most people but continued masking, without rest, day after day, continually draining extra energy adds up.

I've hit the burnout phase more than once in my life, but hitting it in adulthood has been eye-opening (partially because it led me to my Autistic discovery).
My most recent burnout has helped me to realize the value and necessity of self-care. It also forced me to look at myself with more self-compassion.

Finally, in my thirties, I've made my mental and physical health a priority. I have also stopped spending time with people who need me to be the masked version of myself.
Many Autistic people mask regularly. Some Autistic people don't.

I've seen Autistic people debating online if the ability to camouflage one's Autistic traits is a privilege or a curse. This black and white thinking concerning Autistic camouflaging is short sited. In reality, the issue is more nuanced.
Yes, Autistic people who can mask can sneak into neurotypical society, but at what cost?

What about Autistic people who cannot or do not mask, who society may shun for their inability to assimilate expectedly?
It is these Autistic people I have thought about, frequently, as I worked to unwind and unravel my mask since learning I was Autistic four and a half years ago.

Being an Autistic person who can mask but is unmasked is an immense privilege I intend to use for good. Being open and proud as an Autistic person is an act of defiance.
Learning I was Autistic as an adult was like hitting a reset switch on life. Suddenly I saw the world with new eyes, a mighty change set in motion.

I realized I had been working against my Autistic mind instead of with it, as I tried desperately to hang onto a neurotypical lifestyle (that I didn't want or enjoy).

For the first time in a long time, I started to feel proud of who I was and had begun to find ease in my skin.
I'm determined to stop using work as my escape from uncomfortable situations and emotions. I have pride in myself as an Autistic person and have been working hard to get my mental health issues in check.

Those who don't understand Autistic Pride might ask, "How can you be proud of something you have no control over– like being Autistic?"

The need for Autistic pride is not born from a need to celebrate being Autistic. It is a recognition of our right and to live authentically as NeuroDivergent human beings.