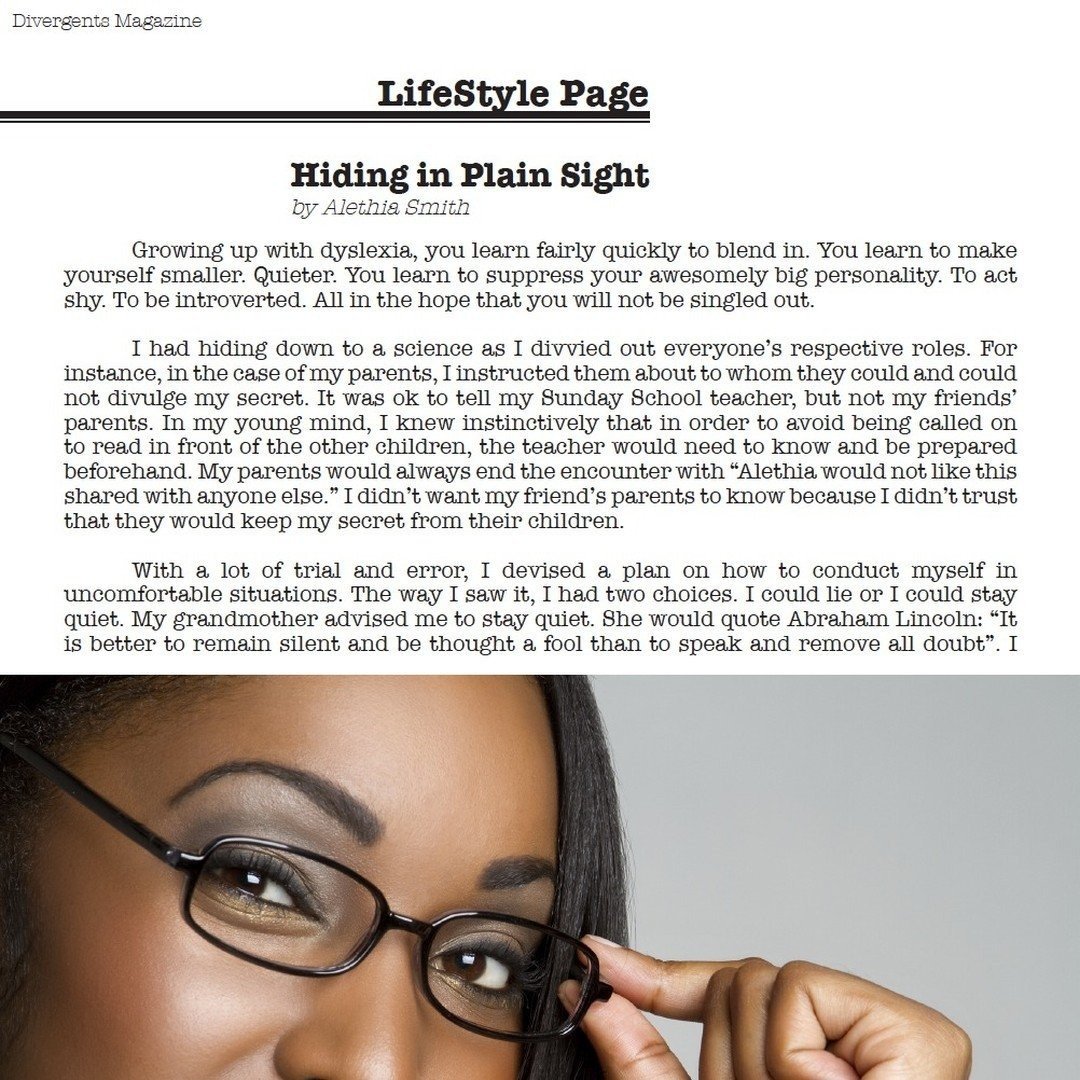 Growing up with dyslexia, you learn fairly quickly to blend in. You learn to make yourself smaller. Quieter. You learn to suppress your big personality, to act shy, to be introverted. All in the hope that you will not be singled out.

I had hiding down to a science as I divvied out everyone’s respective roles. For instance, in the case of my parents, I instructed them about to whom they could and could not divulge my secret. It was okay to tell my Sunday School teacher, but not my friends’ parents. In my young mind, I knew, instinctively, that in order to avoid being called on to read in front of the other children, the teacher would need to know and be prepared beforehand. My parents would always end the encounter with “Alethia would not like this shared with anyone else.” I didn’t want my friend’s parents to know because I didn’t trust that they would keep my secret from their children.

With a lot of trial and error, I devised a plan to conduct myself in uncomfortable situations. The way I saw it, I had two choices. I could lie or I could stay quiet. My grandmother advised me to stay quiet. She would quote Abraham Lincoln: “It is better to remain silent and be thought a fool than to speak and remove all doubt”. I know this may seem harsh, but my grandmother was born in the 1920’s as an African-American woman in America, who struggled with reading herself. Her accumulation of 70 years of life in this country had led to her expressing this – her tried and true advice. It was given in love and has served me well through the years. But so has lying. For instance: “I’m so sorry I can’t read today. I forgot my reading glasses at home.” Or I’d excuse myself to go to the restroom, when it was getting close to my turn to read.

My siblings played their assigned roles, as well. Anything I was asked to do in front of others, that they knew I could not do, they automatically took over the task to save me from any embarrassment. My dyslexia became a secret we guarded at all costs.

Eventually, I had “Do not call on Alethia unless she volunteers participation” placed in my IEP as an accommodation. But over the years, I still had teachers who would try and test my resolve. For instance, my biology teacher insisted that I read out loud one day in class. When she called my name, I was startled because it was totally unexpected. I had been in class, for half a semester, by this point and she had never called on me before. She had read my IEP and I had discussed it with her at the beginning of the school year. All I could think was, “Why is she doing this?” I regained my composure and replied, “No, thank you.” She then said, “Alethia, you have such a beautiful voice; we would all like to hear it.”

I replied for the second time, “No, thank you.” As my peers begin to whisper around me.

“Just read”, my teacher said, “Participation is 90% of your grade, right?”

“Alethia please see me after class” She would not let it go.

One of my good friends leaned in and said, “I don’t understand why didn’t you just read?”

Then another boy sitting behind me said “You can read. Can’t you?”

After the class ended I slowly walked up to the front of the classroom where my teacher was sitting grading papers at her desk, as she looked up to address me.

“Alethia, as I mentioned before, participation is 90% of your grade. And you will not be able to pass my class without participating. You have a beautiful voice and I would like to hear it.”

She replied, “Part of your participation grade is reading aloud.” She was forcing my hand and I did not have anyone to support me, at that moment. So I became my own advocate. “

“Miss Brown,” I replied. “I have an IEP that says I do not have to read aloud. And if you keep insisting that I read aloud, I will have to tell my parents. “ She looked at me with an expression of betrayal.

“I’m sorry, Miss Brown,” I blurted. “I have to go. I don’t want to miss my next class.” Then, I left. And from that day she never asked me to read again.

As I grew older and learned to master my environment. I was able to be more myself. I let my personality flourish and became the social butterfly I always was. The key to my transformation was freedom in the knowledge that no one could make me do anything I didn’t want to do, including reading out loud. I also found that the more I appeared “normal,” no one questioned my abilities. So I began to study and emulate other successful people in my circle, as an observational learning tool. I would take all of the best qualities I admired in a person and ask myself why I was drawn to this style, belief, or personality.

I was careful to hold my core beliefs close. But, I became a mirror giving back to people the best version of myself. By the time I entered high school, I made friends quickly. I knew that to make friends, you had to show how friendly you were. So I talked to everyone and excluded no one. I would join all of the social clubs I was interested in. My objective was to be seen on campus as much as possible. I knew this was important because I had mostly Special Education courses with only three mainstream classes. And I also knew that if I was not seen in the general common areas, classmates would begin to question me about my classes and which teachers I had for what subjects, so they could link up with me during the day.

There were two Special Education classrooms in the school basement, as well as Driver’s Ed, and Woodshop. So it was easy to cover my tracks when I was spotted in or leaving the basement. If asked what class I had I would always say Drivers Ed. When I could no longer use Driver’s Ed as an alibi because I had my license and was driving to school by my 16th birthday, I would then say that I had woodshop or I was vesting a friend in another class. I would say anything to hide my secret. I would even sit away from the doors that lead into the special ed classroom because it had little small square windows through which you could peer inside the room.

By the end of high school, I was in three school plays, choir, gospel choir, and was the manager of show choir. I threw myself into the activities, like the Ladies of Elegance Cotillion, where I won the title of Queen of the Ball. I was active on the prom committee and homecoming committee and was voted “most friendly” out of a graduating class of almost 400. Also I invited everyone to a slew of social events – my parties were legendary – all while keeping my secret.

I didn’t know it then but high school was the testing ground of how I conduct my life. Always leading with my strengths. Always hiding in plain sight.