Hiding in the Closet 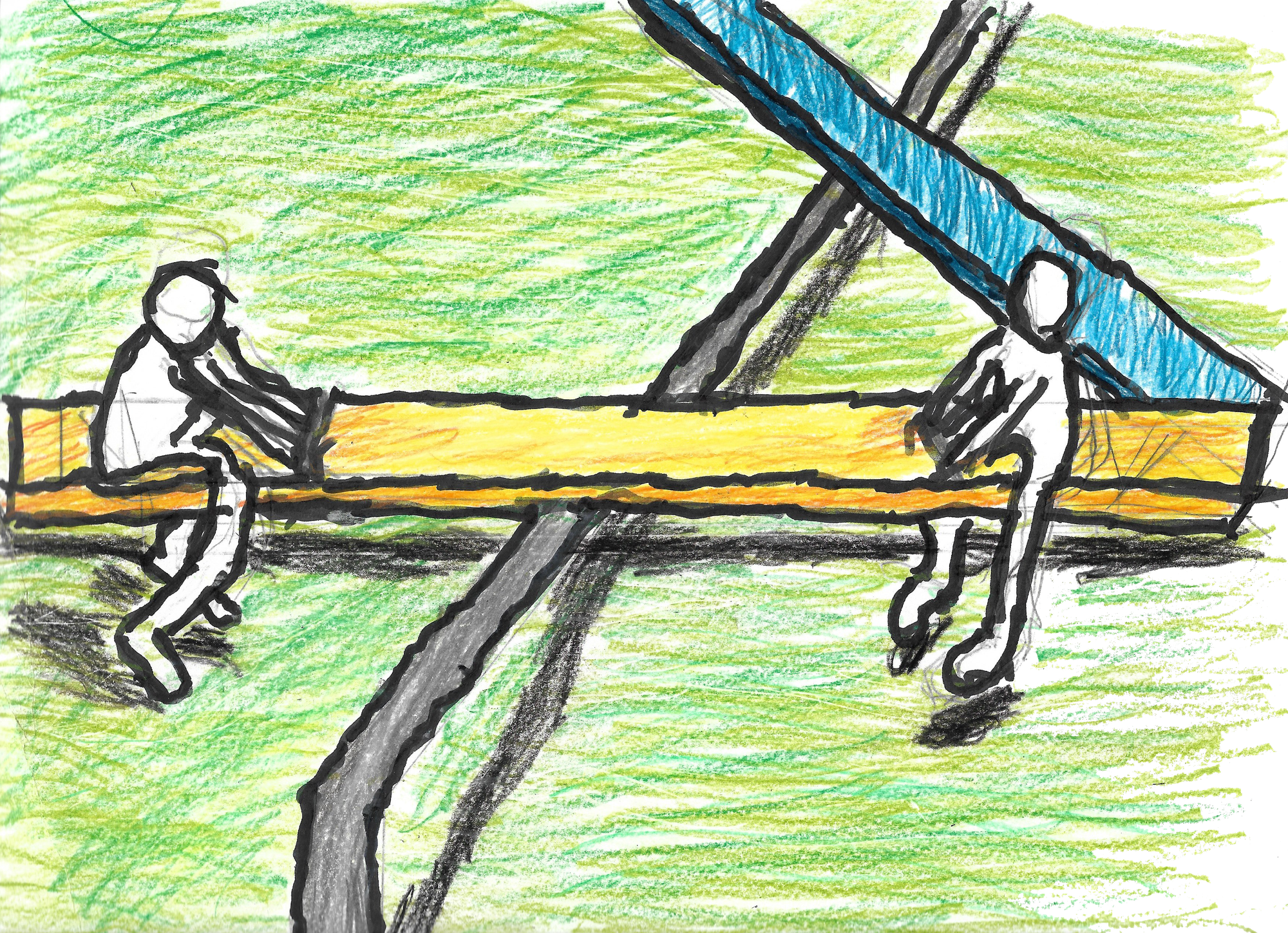 To this day, baloney always reminds me of the smell of rotting death. My sister, Linda, always ate what was in her lunch box, including her sandwich. I, on the other hand, would skip the sandwich and just eat the snacks and drink the tepid milk box. Ah, but what to do with the offensive sandwich? I remember the time I stuffed my sandwich deep into the toy box on the porch, away from prying eyes, covertly and in a panic with darting eyes and shallow breath.

Predictably, my mother found the sandwich, covered in ants and reeking to high heaven. Hearing her raucous screams upon the discovery made us kids cringe and look immediately for a means of escape. And as usual, we were all rounded up and questioned one by one. We all vehemently denied responsibility—all but Linda, who said nothing. She just stood there with a bowed head and kicked her scuffed keds back and forth on the slate tiles of the porch. Shivering uncontrollably inside, though externally presenting my usual flat facial facade, my heart called out to Linda. Though I knew if I confessed, I would get a beating with the belt and no dinner. As she stared into our faces, she turned to Linda and said, “Why are you so stupid? Only babies do this.” And my mom turned away, tossing the rotting ant sandwich outside. Linda just stands there, feet going back…and forth.

I grab her hand and say, “Let’s go play,” and we run outside into the unrelenting sun.
They called us Irish twins, my sister Linda being 11 months older than I. My earliest memory is of being tossed onto the itchy herculon sofa together for photo ops with my mother’s new Kodak Instamatic camera with the twirling flash cube. I remember squirming because of the prickly feeling of the sofa cushions and Linda, sitting still as a mouse, quietly sucking her thumb.

She didn’t start talking until around age 3, and my mother believed something was wrong with her from the beginning. Back in those days, my parents were not aware or couldn’t afford to get tests done. Or, honestly, they were not willing to face the struggle with their first born child. My mother’s older brother, Johnny, was “not right in the head,” and my father always blamed Linda’s issues on my mother’s genes. “You gave it to her,” he would say,
Linda was a quiet little girl, always doing what she was told, even if she didn’t “pay attention” right away. She was ridiculed pretty constantly by both of my parents. If she didn’t pay attention or if she lagged behind when we were at the beach walking, she would get heckled by them.

What’s wrong with you?

Why can’t you walk with us?

Why can’t you hit the ball as good as Debbie?

She’s half your size and she’s doing better than you.

And on and on.

Linda always seemed sad and quiet, preferring to stay in her room, rocking back and forth singing songs to herself. When she would get yelled at, she would go run and hide in the closet in the bedroom that we shared together. At that young age, I felt conflicted and confused as to why my older sister couldn’t do things the way I did them. I would get frustrated with her; I hated to hear my parents yell at her, and it was embarrassing how they ridiculed her in front of my friends.

When she started school, Linda was kept out of kindergarten and placed in what was called the “retarded kids’ class.” It seemed like my parents were always mad at her for not being able to perform as they expected or keep up with the other kids. Children would tease her and push her around. It would enrage me that she wouldn’t stand up for herself, but I became her bodyguard anyway. I could not understand why she just stood there taking the abuse. This would continue as we grew up and became teenagers.

Then, at 17, my dad approached me in my bedroom. I was looking over a list of my upcoming fall classes. I had applied and been accepted to a Junior college in Boston, unbeknownst to either of my parents. I quickly shoved the paper under some other papers as he unceremoniously threw open the door to our room.

“I have something I want to talk to you about," says my dad in a low tone. The almost whispered words made me look up in confusion as he usually spoke to me loudly with some command or criticism. This was different, almost a soft whisper.

“Yes, Dad?” I submitted, terrified at what would come next.

“I want to know if you want to go away for a weekend, just you and me," he continued. Perplexed, I just stared at him and started feeling a sick feeling in the pit of my stomach, like someone punching you in the gut.

I played stupid and said, “Why can’t we all go together?”

He said in that feral whisper, “No, just you and me.” I shifted uncomfortably in my chair and my mind scrambled for ways to escape, my eyes looking everywhere but at him. And then, he drops the bomb. “I want to show you how it’s done.” He says, “I don’t want anyone to hurt you. I promise I won’t hurt you.” He was staring at me and I was trapped.

And then with her uncanny timing, Linda nonchalantly skips by my dad and saunters into the room. She is humming Tie a Yellow Ribbon under her breath. My eyes flashed her that long familiar warning. She slowly backed out and ran down the stairs, clunking her feet on every tread, her humming now tinged with a manic energy.
My father ignores her completely, just staring at me with those pleading eyes. And in that moment, a fragment of sass, still lurking, rose to the surface and I blurted out, “I don’t want to have sex with you. You’re my Dad. It’s disgusting."

His eyes flashed fire and his face twisted into an expression I will never forget for the rest of my life. He turned to leave and over his shoulder, spat out, “I want you outta here. Pack your bags. You’re gone."

Trembling, I packed a few bags including my coveted figure skates and took the MBTA bus to Wellington Circle where I got on the Orange Line to Boston. After ten nights alone on the street, I was able to find college housing on Marlborough Street in the Back Bay.

I was shunned by the family and not allowed to speak to anyone or contact them. He said no one was to acknowledge that I had ever been a member of the family. Linda took all of this very hard, and we didn’t see each other for a long time. Eventually, Linda finished high school but she continued to live in my father’s house—she had nowhere else to go, She had no friends, didn’t have a job and just stayed home in her room watching the old Zenith black and white.

She probably had to take most of the abuse after I was gone. According to my other brothers and sisters, she was mainly ignored by everyone. She started having temper tantrums. Once my mother finally found the courage to move into a condo with my younger brother, Linda found herself alone with my father. Abandoned by her mother and her siblings, she resorted to roaming the streets in the neighborhood, day and night, just walking and walking until she got lost and eventually someone would bring her home. Every time, my father would fly into a rage, and I shudder to think of what her life was like.

After so many years of abuse, he finally kicked her onto the street as well. “Let the state pick up the tab for her,” he’d said. “I’m tired of paying her keep.” Luckily, the state found Linda and she found a safe harbor, with a community funded by the Massachusetts Department of Mental Retardation. After shuffling from placement to placement a number of times she finally landed in a home.

All of this took a severe toll on Linda’s mental and physical health. When she first moved to state housing, I would try to visit her. I remember she didn’t speak too much during the visit. However, as soon as I started to leave she reacted violently, ripping at her clothes, clawing at her face, hitting herself, moving furniture around, breaking things and crying loudly, “Nobody loves me! Nobody loves me!" She begged me not to leave her there and to take her home with me. It was heartbreaking—she screamed for several days after I left. The house manager and her case manager banned me from visiting after that.

That was hard to hear, and I couldn’t help but think back to a memory of when we were kids. Linda is dressed in a mismatched jumper set with different socks and worn white Keds. Our Uncle Nick, side hustling as a bookie, takes bets over the phone in the corner of the living room, waving us kids off like pesky flies, mumbling numbers into the receiver. Auntie Marlene and Auntie Angela are trading veiled insults with each other. All us cousins weave a vicious game of tag through the scent of cheap perfume and intermittent puffs of cigarettes. My grandfather sits in front of the TV set, sipping Seagram’s from his Looney Tunes juice glass, swearing and glaring at us as we dart by his chair.

Knowing exactly where she’s hiding, I open the closet door and peer in. Linda sits on the floor rocking rhythmically back and forth, hugging herself, singing. Her thumb in her mouth as she sings the song, over and over. I look down at my shoes and say, “Do you like my shiny shoes, Lindy?”

She pops the thumb out and says, “They’re so pretty, Debbie.” She is smiling out of the corner of her mouth. I reach out and tug on her hand and she rises up, and together we walk down the stairs, hand in hand, to face the music.